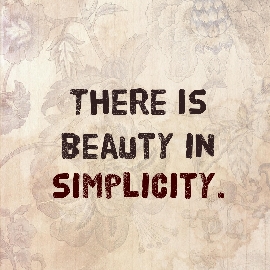 We are in the single digits of the Minimalism Game and honestly, I could be happier. To recap, the #minsgame is played by getting rid of an item in accordance with the day of the month with a grand total of 465 items at the end of 30 days. More on how my week has gone later but first here’s Melannie’s take.

Jasmine: How is your game going this week?

Melannie: This week is proving to be more difficult.

J: Are you still enjoying the game?

M: I am enjoying getting rid of stuff, but I’m starting to feel the pressure of wanting to complete the challenge, but not at the expense of things that [I] do use.

J: Has anything surprised you unexpectedly about the game?

M: No, I haven’t had any expected surprises.

J: What is the most interesting thing you’ve gotten rid of so far?

M: Well, the most interesting thing I’ve gotten rid of is a lampshade frame. I wanted to reupholster it, but found one on sale instead.

M: No, I will not make it to the end, but I will strive to make it as long as I can.

As for me, my week has gone fine but I had an epiphany yesterday that I don’t want to play the game anymore. I’ve mentioned before that my husband and I are in the middle of a home remodel and at this point, I’ve had to go through boxes to figure out what we’re not keeping. I remember at the of day 20, I was collecting items thinking, I don’t want to play anymore. It probably doesn’t help that I don’t end up picking my items until the end of the day when I’m worn out.

One thing that has surprised is how fast I feel like the month has gone. I think it is partially due to the game because after I finish collecting items, I think about how I need to get rid of more things the next day. Has this game gone quickly for anyone else?

The most interesting thing I’ve gotten rid of is our old counter tops from our kitchen. We recently replaced them and had no need for the old ones. I was planning on getting rid of those items earlier in the game but just now got around to it a couple of days ago. We gave them to a friend of ours who is going to drop them off at Habitat for Humanity. Hopefully, they will find a good home there.

That’s all for this week’s update. I encourage you guys if you are playing (and having a difficult time like me) to stay strong and keep trying your best. I’m going to make a Facebook album at the end of the month and I look forward to recapping all of the things that I’ve gotten rid of. We’re in the home stretch and I’m looking forward to hopefully finishing the game with you!