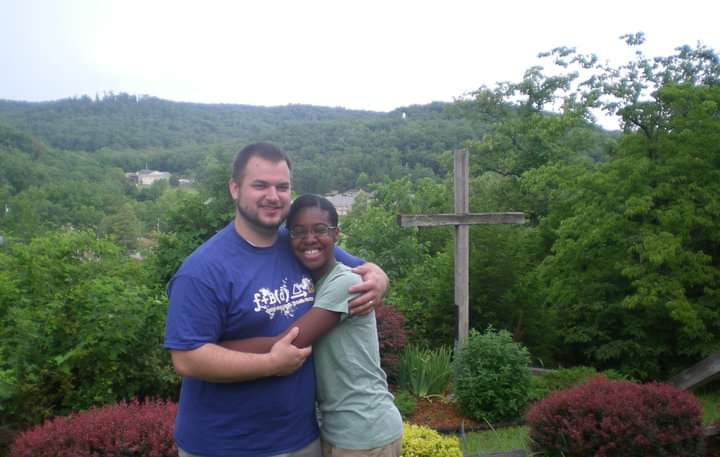 My faith and love for Jesus Christ is the bedrock of my life. I believe that because of His death on the cross and resurrection afterward that I have a new life full of freedom. I am no longer bound by my mistakes and shortcomings. Because of my beliefs, I will go to heaven after I die. That’s my faith in a nutshell. How did I come to believe this? Let’s start at the beginning.

Growing up, as a kid on the southside of Chicago, my mom always took me to church. At three years old, I can vividly remember the large hanging clock on the wall in the children’s nursery where I spent my time during church services. When I was five years old and in service with my mom, I remember a pastor asking the congregation at the end of service if they were to die today did they knew where they were going. Would they go to heaven? He asked them to pray after him and to acknowledge their sins. He asked them to believe that Jesus and his blood brought healing to them through His death and resurrection from the cross. He asked them to pray to ask Jesus to be their Lord and Savior. I didn’t want to go to hell (who does) especially as a five year old so I prayed that prayer right along with the pastor.

If you know me personally, you know that I am a planner and a rule follower. Same goes with my new found faith as a child. In elementary school, I continued to go to church with my mom. I prayed before bed. In my junior high years (Even though I didn’t go to junior high. It was a K-8 private Lutheran school.) I started to do devotions. Spending time with God to pray and read the Bible. I joined a church youth group of my friend and began attending regularly.

When I got to high school, I continued those habits. Go to Church. Check. Pray. Check. Have Devotions. Check. Not intentionally do bad things. Check. Stay out of trouble. Check. Get good grades. Check. I was doing all the right things but felt very stressed and jittery inside but brushed it off because that’s life. It wasn’t until I moved to Springfield, MO (for a boyfriend – now husband) through some unforeseen circumstances (that’s a whole other blog post) that I realized you didn’t have to be stressed out all the time or that there was a problem with being stressed all the time.

I remember when I was 19 and coming to the realization that I have never asked God what he thought I should do with my life. It’s my life, right? Isn’t He just supposed to bless me and my choices because I believe in Him? It’s not like I’m asking for anything crazy just to be successful in my desired career field – journalism. He’s going to bless that right? Wrong. It wasn’t until I was 19 and had moved from the third-largest city in America to the third-largest city in Missouri (VERY DIFFERENT😅) that I realized God had an actual plan for my life. It’s not that I’d never heard that before but it never clicked. It was through a more personal relationship that I learned that God cared about the details of my life and that he had a plan for them. Jeremiah 29:11 says, “For I know the plans I have for you says the Lord. Plans of peace and not of evil to give you a hope and a future.”.

As a young adult, I started asking God different things about my life. What career field should I go into? Should I marry the boyfriend I’d been dating for 4 years? When we got engaged, I was so nervous that we were too young.  Not that I didn’t love him but I wanted to experience some more things outside of the year and a half of going from ‘dependent’ on my parents’ taxes to ‘married’ on my own. I remember the day we got engaged asking God if this was the time to get married. I came across the Bible verse in 1 Timothy 4:12, “Don’t let anyone look down on you because you are young, but set an example for the believer. In speech, in life, in love, in faith and in purity”. Marrying my husband was one of the best decisions I’ve ever made in my life. He is my best friend, my life partner, and my true love. It hasn’t always been easy but it’s been worth it. We celebrate 12 years of marriage on Sunday, June 28th, and we have been through some things but I am a better person because of him and us. 💕

But back to my relationship with the Lord. He would literally take me step by step and hold my hand through my tough life choices. I would ask Him if I should do something and he would be faithful to show me the way. Whether it was through a Bible verse, or what a person said to me that had no idea of what I was talking to God about, or something I saw on tv. Along with whatever confirmation I found, he would overwhelm me with a peace that I can’t describe and that’s how I’ve been living my life for the last 14 years.

Does that mean that things were always easy? No!! There were a lot of times that I dealt with disappointment. But the Bible says times will be tough John 16:33 says “I have told you these things, so that in me you may have peace. In this world you will have trouble. But take heart! I have overcome the world.” One of those tough times was when my husband and I purchased and ran a business that failed in our early 20s. We had spent a lot of time in prayer and counsel about said business but it failed nonetheless. Through that though, He taught me even more about how I could trust Him.

He taught me to have the most serene peace within myself through Him. When I was 19 I heard the term anxiety in church and it really registered with me. So THAT’S what I’ve been feeling. The Bible says, “Be anxious for nothing but in everything by prayer and supplication with thanksgiving let your requests be made known unto God. And the peace of God which passes overall understanding will guard your hearts and minds in Christ Jesus.”. I had that verse memorized by the time I was in 6th grade but I thought it was normal to just feel jittery and nervous all the time. It wasn’t until I got in my 20s that I discovered that God had a better way for me. A way of peace.

I’ve had times when that peace left me. Like when my husband and I had our first child which is a whole other blog. I was so stressed and nervous about motherhood. I was a wreck. Here are some of my thoughts from back then. I’m supposed to know what my child’s cries mean. I’m supposed to have this supernatural bond and love for him. I’m supposed to know exactly how to care for this baby. What is wrong with me? Why aren’t my instincts kicking in? I had so much mom guilt. It was terrible. But through my relationship with God and Jesus, I came to find my parental confidence. Not in my own abilities but that God is faithful to show me what I needed to know to care for my kids as best as I can. And that because I am trusting Him and believe in Him, He is faithful to fill in the gaps of the things I don’t know. It takes the pressure off.

In my early twenties, I heard a pastor in his seventies say if he died and there was no heaven, he would have no regrets about entrusting his life to God and doing what he felt God led him to do. Do I believe that there is an afterlife and am I confident in where I’m going? Yes. But even if I was wrong, I have no regrets with my decision to follow Jesus. He has proven himself time and time again and there’s no other way I know to have true peace and joy and love in my life. This is why I believe. 💓